Visitors to Charleston in the early 19th century found their welcome was often short-lived, literally, and gave rise to the famed contagion known as "stranger's fever."

Washington Square Park features monuments to Francis Salvador - the first Jewish official elected in South Carolina, and to Elizabeth Jackson, mother of Andrew Jackson, both of whom gave their lives to the American cause in the Revolutionary War. Michael's tour walks in the footsteps of Charleston duelist and blockade runner George Trenholm, whose life was the inspiration for Rhett Butler's character in Gone With The Wind.

The epitaph of Charleston diplomat James Louis Petigru is still a stirring read among historic grave markers in the heart of the city. Petigru famously referred to pre-Civil War South Carolina as "too small to be a nation, too large for an insane asylum".

Privateer Stede Bonnet was renowned as the "Gentleman Pirate", but his manners did not suit city folk in 1718, and he was hanged and buried along the tour route.

Street vendor Sammy "Goat Man" Smalls was a common site along lower Church Street in the 1920's, and became famous as the title character in Charleston author Dubose Heyward's Porgy. Just down the same street, the ghostly tale of "The Whistling Doctor", Joseph Ladd, is still a compelling story.

When Revolutionary War hero Thomas Sumter warned of the dangers of the new Union, confirmed with South Carolina's ratification of the Constitution inside the Old Exchange building, little did he know that his name sake would be the focus of disunion seven decades later. Wealthy Charleston merchant and banker George Walton Williams built a fabulous 24,000 square-foot mansion on Meeting Street in 1876, as well as giving his daughter a $75,000 wedding gift used to build another grand house in 1892. 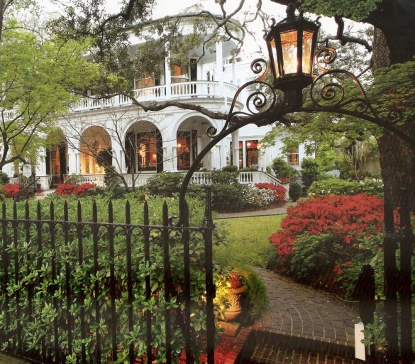